To play at Lords is the dream of most cricketers- to score a century there is beyond the dreams of most. But this is just what Rainham cricketer Jim Austin did last Tuesday when he scored a magnificent 113 to win a memorable match for Rainham against Cross Arrows on the Nursery Ground. His innings which came off 105 deliveries included 17 fours and 3 sixes.

Dazed from having suffered a gruelling three hour coach journey through early morning commuter traffic to St John’s Wood, Rainham took the field in front of a surprisingly large crowd, keen to watch a game after the recent ending of the county season.

Cross Arrows found it tough going on a damp wicket that suited the seam bowling of Daryl Foote (3-46 off 17 overs) and Tom Manning (4-81 off 17 overs). They bowled well to restrict the home batsmen to 71-1 off the first 25 overs. Cross Arrows hit back when Aussie batsman Alexander smashed an aggressive 76 to take his side to 193-6 but apart from Knappett 34 the remaining batting faltered but still leaving a formidable total of 222.

After the fall of Tom Kearney’s wicket at 14 Jim Austin and Tom Waters batted steadily in a valuable partnership of 82 to place their side in a good position. Austin was next joined by Matt Goodwin and the score accelerated as the pair blew away the spin bowling with some awesome batting in a partnership of 104. As Austin neared his century with an array of superb shots even England skipper Andrew Strauss broke off his meeting in the bar to watch the Rainham hero reach his hallowed target and to join in the standing ovation of the large crowd.

With the dismissal of hero Austin, Kevin Waters and Matt Goodwin found the remaining runs a formality as Rainham reached their target with plenty of overs to spare to record an historic seven wicket victory.

Having won the admiration of the Middlesex crowd with their magnificent display, the players attended a special presentation in the bar where skipper Tom Waters was presented with a shield on behalf of the Cross Arrows to mark the occasion. A copy of the club book ‘150 not out’ was also placed in Lords cricket library for future generations to read.

This was the last event in Rainham’s 150th anniversary season and what a way to end it. Having already held an anniversary dinner for past and present players, a special cricket week, the visit of Lashings World XI to Berengrove Park and seen the publication of a book about the club’s history, Rainham had a season to remember. In fifty years time, no doubt, when they hold their next anniversary, Jim Austin will be able to tell his grandchildren about the day he hit a century at Lords. 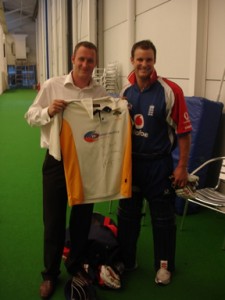 Paul Swaine with Andrew Strauss during Rainham’s visit to Lords